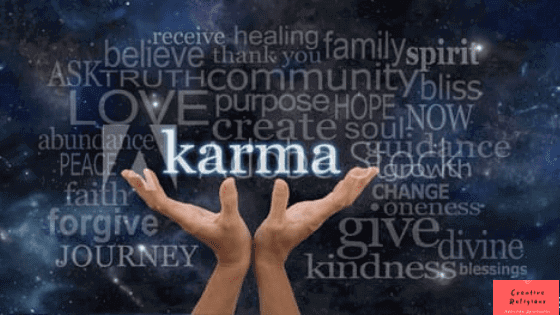 The Karma that we do every day Off Thinking mostly because the Karmas of the other senses like the Hands and the Legs are Rarely Accounted for and In Kaliyug, The Sense Karmas rarely build Karmas. We have control over this feature of Karmas.

This is Accumulated Karma or the Kitty of Countless Karmas that are stored in the base of our Spine and Leaves EVEN with the Karana (Causal) body that Comes out after Samadhi. It is only in Mahakarana Immortal body and the Soul Eternal Body that a Body gets freedom from Sanchit Karma. Mahakarana Body is the body certain Samadhishtha attain post-Samadhi and death. We have no control over this Feature of Sanchit Karma because what is done is done. Reincarnation is the metaphysical or religious notion that after bodily death, the non-physical soul of a living being starts a new existence in a different physical form or body. Reincarnation is a core concept in Indian religions, including Jainism, Buddhism, Sikhism and Hinduism, although there are Hindu Communities that do not believe in reincarnation.

‘This has two Meanings in two different classifications. One is Predetermined Destiny or Predestined Desire.  Other is Living a Situation Because of a Sanchit Karma of the Past. or Doing a Karma which was not our Intention but we have no choice than to do it. We have no control over this Part too.

Sometimes a man may be seen in a prison for something that he has not committed and he has to do the Wood Cutting and Gardening which He does not want to do. Thus, The Unease in the Situation is Prarabdha and the Karma that he is doing off Prarabdha is Prarabdha and NOT Chalaymaan and that it is NOT building a New Karma.

Again he is Neither building a Karma by the Handwork that he does and nor does he Build Karma by What He Thinks About Doing those works, But he will definitely Build a Karma if He plans anything Positive or Negative that comes in his mind because of those Works that he did not want to do and was forced upon.

Sometimes people suddenly realize after years of Studying medicine that They want to be in New York and Do Theatre. That is Because of the Pre Destined Desire feature of the Prarabdha.

Karmas is a Complicated Subject especially if We discuss Prarabdha.

What is the Science of Maheshwara when it comes to Prarabdha?

The question arises that if Maheshwara has the power and designs Everything from Start to end and is the beginning, middle and end of the Beginning, Middle and End and Everything is Connected to it like pearls in a String then How does the Free Will, Which is his First law of a Material world comes into action?

Maheshwara Designs Everything and has Control and Has Command over every feature and also The Knowledge of Each and every moment of Each Soul’s journey in Countless bodies even before it Impregnates the Sleeping Souls into its womb(That’s the Sixteenth Opulence and Awareness of Radha which even Brahman does not have), YET(Please Try and Understand it)by her Supreme Magical Potency and the Inconceivable DIVISIBILITY feature with Soul, It is Able to MANAGE to give a Free Will to a Soul in a Material World.

It is Only Possible because of the Maheshwara Feature otherwise the Soul does not Even Have the Power to Release the Karma Impact on it in the world where Maya dominates Soul.

Thus, If someone says for a Situation that it Was Prarabdha or the result of one’s own past deed, That is true. If someone says it was God’s will, That is Also True because Maheshwara knew all the way that the Man will become a terrorist and they will become a Saint and again become a murderer and he always had the Control despite Remaining Aloof from Even Formless Infinity.

Nonetheless, Simultaneously and Inconceivably and Magically, Maheshwara leaves his hands from the Reins because The Soul that has Individual Sentience(The Source Unborn  Sentience is Maheshwara itself) Gets The Rein in Its hands. And the Parmatma which Resides in everybody movable or Immovable Observes and Not interferes in the way Soul Uses the Reins on the horses called Senses, Mind and Intelligence of the Chariot called the body. See. Maheshwara does not even come in the Observation/Noting Feature. A Maheshwara expansion or Spy called Parmatma or Supersoul is present in everybody. The Lazy Absolute Absolute has Everything in it, But It says NO to being in Everything.

IT ENJOYS ENTERING A BODY WITH SUPREME  POMP AND SPLENDOUR AND IT IS THEN THAT THE SHOW BEGINS.

And the SHOW must go on!

Some Communities Describe 4th type of karma which is known as

Agami karma
Agami karma is described as future karma: effects that are the fruit of our current actions, decisions and virtuous works. In a spiritual practice of yoga, karma is usually represented with a bow and arrow analogy. In this analogy, agami karma is represented by an arrow that’s within the bow and prepared for launching, and is close to be released by the archer. This indicates that, at now , the archer has complete control over future outcomes. He/she features a choice in what arrow to release or the way to release it, and this may effect future karma.
In popular culture, agami karma is usually what most of the people consider or believe when it involves the concept of karma: the power to cause positive or negative future outcomes by a current decision or action.